ABOUT THE TX RACE™ RESTYLE KIT®

TX RACE™ Restyle Plastic Kit® for Honda CRF250R 2006 2007 2008 2009 is an update and modernization of the aesthetic line of this 4-Stroke model of Honda [CRF] Motocross/Enduro. TX RACE™ offers an attractive solution that is easily assembled, and no chassis modification is necessary. The TX RACE™ Restyle Plastic Kit® notably enhances the appearance of your motorcycle, more than compensating for the cost of the kit. 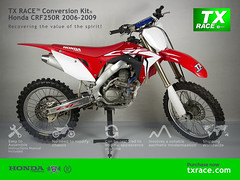 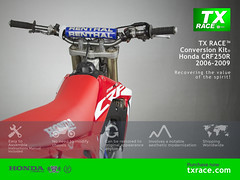 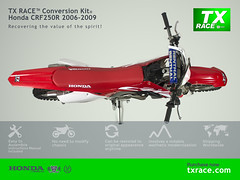